Stepping Up To The Crease – The Cricket Goods Manufacturers of Meerut 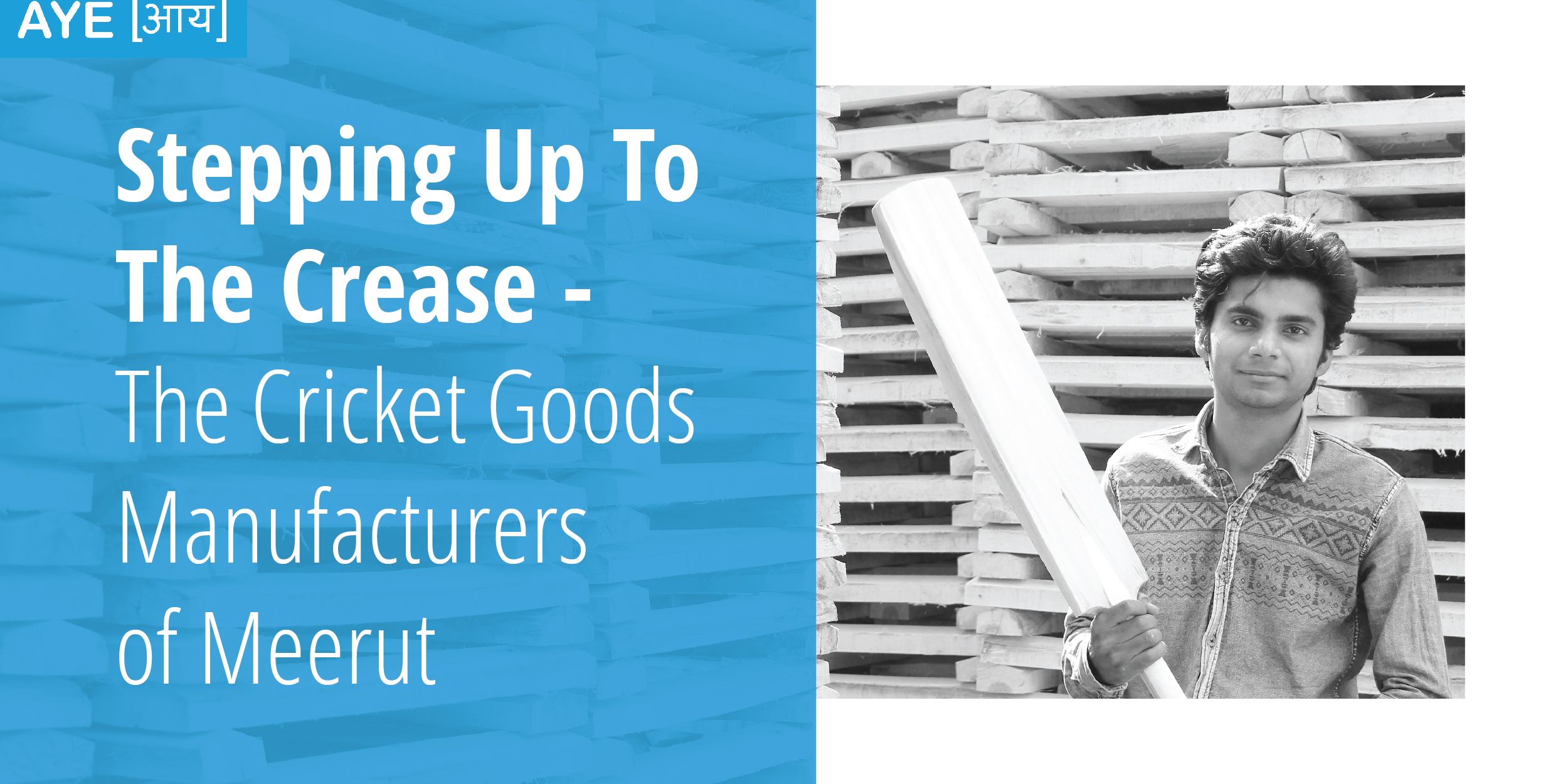 It is no joke when people say that India has a lot of religions. As a country that has been home to many faiths, there is one belief that transcends borders even more than anything to do with god. That belief is Cricket, the most popular game in India. From stadiums to little streets, the enthusiasm for Cricket is the stuff of dreams and aspirations.

Therefore, it should not come as a great surprise that there are many people who work behind the scenes to fuel this nation-wide obsession. As many players there are, it would be pointless without the tools of the game. Let us introduce you to two people who make playing the game possible, by making perhaps the most essential elements of the game – the bat, and the ball. Let’s go to Meerut, where two Humans of Aye work tirelessly to further their dreams, and feed India’s demand for more cricket.

Shahid is a quiet soft-spoken man who makes cricket bats, and he’s been doing it for 25 years. His father used to be in the textile industry, but as a young man, he was not very interested in the business. He used to be aimless and waste time loitering around, as he put it, until a family friend thought he could use some direction. The family friend introduced him to the industry, and he pulled Shahid into work. But instead of resenting him for this move, Shahid quickly found himself liking the work he was doing. He stuck around for longer than he thought, and stuck around some more, until he spent almost 18 years at that factory.

As a student of the process from a very young age, he turned out to be a master craftsman. He wanted to start his own manufacturing business, and for the past 6 years he has been making his own cricket bats. He has 7 full time employees working in his factory, and they use machines to whittle down, shape, and assemble the bats. He supplies to the local Meerut market, and to other states such as Bihar and Jharkhand, though he says that he cannot possibly meet the demand with his level of supply. .He approached Aye Finance for a loan of 2 lakhs about a year ago, and is charging ahead with his business. Once he pays it back, he is looking forward to taking another loan from Aye. He says the loans help him in procuring raw materials in bulk, getting some discounts because he pays his suppliers with cash and not credit.

His pride in his work shines through as he speaks, telling us how his family is happy with his work, and how his kids are in school, though they help their father out in the business after their studies. When asked about the effect of the World Cup on business, he laughs and says there is no change, the demand is always high. He would have to invest in more machines and raw material to meet existing demands. And like any other businessman, he smiles as he tells of his wishes to grow his business. We know he will hit it out of the stadium.

Another hero of the cricket manufacturing industry in Meerut is Khalib. A bright-eyed man, Khalib manufactures cork balls (colloquially called gola) that form the core of the iconic red-maroon cricket leather ball. He started his business about 10 years ago in a small space near his house with one machine and supplied to buyers in the local sports goods market of Meerut. He faced space constraints since the machines he wanted to set up, required larger floorspace. Also, he wanted to employ more staff to manage the machines, but traditional banks would not give him a loan, considering he had no other loan history.

A loan from Aye finance, has helped him expand his business to a bigger space, where he has now set up 5 machines of his own. Now an entrepreneur, he has 12 people working under him and this gives him an opportunity to spend his time in exploring more about the bounce and weight of the ball, when different proportions of cork and wood pieces are mixed together. He now manufactures 3 different qualities of cork balls that he can sell at different prices, while maintaining a year-round supply of goods. He hopes to continue his relationship with Aye to advance his pace of growth and keep the ball rollin!

In this Cricket-obsessed country of ours, there will never be a lack of people to talk about the game with or watch the next match with, and definitely no lack of people to play a game with. As the field where people play out their dreams, we must not forget the small, unsung heroes like Shahid and Khalib, who dream big in life and work, who make it possible for us to indulge our passion.