Gandhi Nagar in Delhi is Asia’s largest textile market.  As you enter the crowded streets, you see workers hurrying with colourful rolls of cloth over their shoulders and you get engulfed in the energy and the dynamics of the street. The streets are lined with small shops stacked like Lego blocks selling everything from ornate ladies’ suits to handkerchiefs for men. And walking on these streets gives you an impression of walking on a travellator, powered not by electricity but by the force of the crowd in the street pushing you. 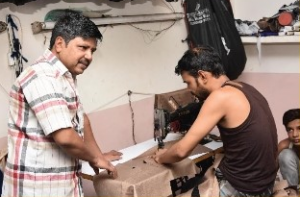 Mohd. Kaleem has his workshop in one such crowded street of Gandhi Nagar where he makes formal suits for men. He employs ten workers and the hustle bustle of the street outside is mirrored inside his workshop. With a measuring tape around his neck and a pencil behind his ear, Kaleem was showing a worker which type of stich to use for the lapel of a jacket.

Kaleem tells us that although he built this business with his own hard work, he inherited the skill from his father who used to work as a master cutter in an export house. Kaleem started a small tailoring business along with taking job orders from a manufacturer in Gandhi Nagar. He used to hem 50 trousers in a day and used to get paid Rs 25 for each trouser. He took a loan from a local trader to buy another sewing machine and employed a daily wage worker which allowed him to hem 100 trousers in a day.  But he realised that despite having doubled his production he still did not make any extra money as most of his earnings went in paying off the trader. After having paid the local trader every month for two years, he was sure his loan was paid off. His accounts showed that he had already paid twice the cost of the machine. But to his surprise the trader informed him that the monthly payments he made for the last 24 months only took care of the interest and the principal amount he had borrowed was remaining. Kaleem recounts it as the most depressing day of his life when he had to sell his mothers’ bangles to get out of the debt trap. 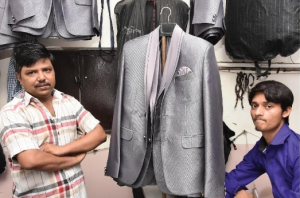 This setback made him work with an even stronger determination and he pushed himself to hem over 175 trousers in a day. Soon he had set up a small workshop moving up from doing job work to creating gents’ coats and trouser. One day an Aye Finance Loan Advisor visited his workshop and told him about loans for small manufacturers like him. Even though the extra capital would have allowed Kaleem to expand his business, he was in no mood to take another loan. The loan advisor was not someone who gave up easily and had continued calling on Kaleem for the next few weeks. Each time the loan advisor called, Kaleem would bring up new concerns. And every time the loan advisor would address that. This went on for some time. Eventually Kaleem relented and decided to take a 24-month loan from Aye. Kareem chuckles when he says it must be God Almighty who sent such a persistent loan advisor to him.

Today Kaleem is on his fourth cycle of loan with Aye and since his first loan he has added 9 more workers, 5 more machines, another floor to his workshop and 4 bangles to his mother’s jewellery collection.