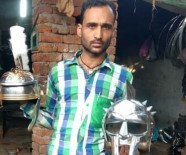 We are entering a humble street of a village in the city of Meerut to meet one of our oldest customer – Intezaar. We are told he manufactures some metal items. It’s a hot humid afternoon and we are not exactly looking forward to entering a workshop with a furnace. But the excitement on Ajay, our loan advisor’s face is stopping us from expressing our misgivings.

Intezaar welcomes us outside his factory. A bit shy and also a little awkward, it’s evident that he does not often have visitors dropping in at his workshop. We enter the dilapidated workshop, half expecting to see some metal sheets being cut or something equally boring. But we are caught completely off guard by the dichotomy of the brilliant products that we saw getting created and the surroundings in which they were being crafted. It could have easily been the warehouse of the popular series Game of Thrones or the movie Avengers, if not for the run down shabby appearance of the factory, as we saw laid out in front of us shiny gauntlets, helmets, leg and arm guards and other variety of armors. And while we got busy dressing up like knights, Intezaar looked on baffled and unable to comprehend our excitement. It was a surreal experience to see the maker of these magnificent products being absolutely unaware of his brilliance.

After the excitement had settled and we had had our fill playing dress up, we sat down with Intezaar to hear his story and how he started to manufacture these novel products. His father had started the business of manufacturing metal sheets and used to supply it to the factories but when he joined the business he felt he could earn more if he molded these sheets and created products out of them. But for that he needed to buy additional machines and also create space to house those machines. And all that required capital.

He had seen advertisement of banks offering loans to expand business and decided to approach one of the banks which had its branch in the Meerut City. But he was turned away as he did not have a bank account, all his transactions were in cash, he had never maintained formal documents of his business and at best could offer some lose sheets of paper he had scribbled his accounts. Add to that he had never availed any loan so had no prior credit history. Still desperate to not let his dream of expansion get squashed, he approached a local trader who was ready to offer him the capital but the high rate of interest he was charging would have landed him in a debt trap.

Intezaar had all but given up when a chance meeting with his father’s friend brought some hope. The friend mentioned that his son Ajay had taken up a job with a finance company that was offering loans even to those small businessmen like him who wanted to expand their business but could not offer the documents required by banks. It all sounded too good. And Intezaar shared that he was a little skeptical, but he decided to meet Ajay as he had known him since childhood and was confident that he would not cheat him.

Ajay, Aye’s Loan Advisor, met Intezaar and explained to him the process of taking the loan, the amount of the loan and how much he will have to pay every month for two years to pay off that loan. Ajay explained that unlike the terms of credit of the local money lender, when he took the loan from Aye the monthly installment he would pay would not just pay the interest portion of the loan but also the principal amount. Ajay even helped Intezaar open a bank account and within 7 days of him filling the application form and sharing the basic documents and minimal information about his business, the loan money was transferred into that bank amount.

It has been 5 years since he had that meeting with Ajay, Intezaar is on his third cycle of loan with Aye, has expanded his workshop to add a shed in which he has placed two more machines which allows him to service more orders.

After a guided tour of his workshop, we bid adieu to a happy Intezaar, although we think he was still wondering why his products had made us behave like kids in an ice cream shop.