The IRON MAN of Katni 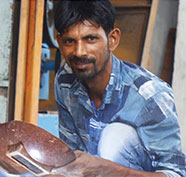 When Ravi’s father died, he was just 17. He was a student looking forward to attending college soon. Ravi’s father was the sole breadwinner for the family and Ravi being the eldest son had to leave school and take over his father’s job at the fabrication unit. He became one of the 20 workers employed by the factory.

Ravi worked for over 5 years and saved up enough to start a small welding unit of his own. His savings barely covered the cost of one machine and the security deposit to rent a small workshop. For a 23-year-old owning his own business, however small was quite an accomplishment. He earned just enough to meet the household expenses of his family of 4 (his mother and 2 brothers), after paying off the rent and other fixed costs.

He continued to run the business at these modest levels for five years, but now his responsibilities were increasing. He had married and had a daughter by then.  He could no longer meet his expenses with the current income levels. But how could he increase his income without taking on more orders. And how could he take on more orders without hiring workers to help him or purchasing machines or renting more space for his workshop. He had no savings left to dip into after having spent all of it on his wedding, the birth of his daughter and his mother’s cataract operation.

His expenses were mounting and despite there being a demand he was forced to turn away customers due to lack of capacity. Ravi was in desperate need of money to expand his business. He spoke to few of his friends, but no one had enough savings to offer him a loan.

One day while scrolling on his Facebook page he came across an advertisement by a finance company which mentioned that just by providing very basic information on their mobile phone application he could get the working capital loan for his business. And that too in three days. Ravi instantly downloaded the mobile app and started filling the details. What he thought would take just five minutes took over half hour to complete. But Ravi did not fret. Although he would start fretting in the next five minutes. After completing the basic details, the app prompted him to upload his profit and loss statement, the audited balance sheet of his business, last three years bank statement and cancelled cheque of his bank account. Ravi did most of his business in cash, so had never needed to open a bank account and moreover he had no idea what a profit and loss statement or a balance sheet was or what the word “audited” meant.

Ravi’s will to fight against the odds brought him to Aye Finance’s office in Katni. He had been turned away from four finance companies he visited before as he could not offer any mortgage and had only asymmetrical documents of his business. At Aye’s Katni branch office he met Rajesh who was the relationship officer and told him that he needed a business loan although he did not have any asset to offer as security deposit or financial statements of his business. And had never taken a loan from a bank or finance company. Rajesh’s reaction was nothing like the ones he had got from the executives of the earlier companies he had visited. Ravi was assigned an LA who explained what all was required from him, what would be the charges and how long it will take to get the loan. He did not just handhold Ravi throughout the process but also explained how meeting his monthly EMI obligations on time will help him get a larger loan at a lower rate of interest.

Ravi narrated his story to us when we visited his workshop two years’ back. His workshop now has four machines and he employs 5 workers. He mentioned he had rented the godown next door to place the additional machines. Just before we are about to leave Ravi, beaming with pride, tells us that his daughter goes to the finest private school of the city and knows all the English alphabets by heart. We had made another happy customer in Katni.