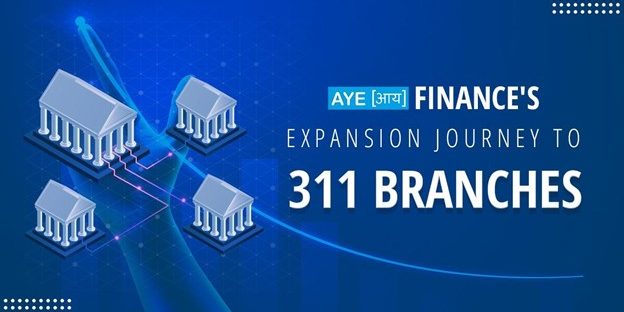 In early 2014, we looked into three micro-business clusters that were distributed across several cities. This was the start of our innovative cluster-based financing methodology, which is still the foundation of what we’re doing today. Our inaugural credit was issued to a lady’s shoe manufacturer in March 2014, who hired 6 people and produced 200 pairs of shoes each week. We issued roughly 200 loans over the next six months through two branches in Delhi.

It was in October 2021, that Aye Finance announced its expansion plan to introduce 100 new centres, pan-India, in the current financial year. This expansion increased our geographic proximity to 311 centres in 20 states, which is another milestone crossed in our journey towards nationwide financial inclusion. Recently hiring over 1,000 employees in Tier-2 cities, Aye has opened 17 new centres in Rajasthan, 23 in Maharashtra, and 4 in Madhya Pradesh, to name a few!

Samir Mehta, our Deputy CEO of Aye Finance, believes Indian MSMEs to be the backbone of the economy. However, he continues, they require a constant inflow of credit and are unfortunately underserved when it comes to financial services. Aye Finance has been serving the credit needs of the grassroots businesses in Rajasthan since 2015 and in Maharashtra since 2019. The current expansion to the new cities will bring an even larger number of MSMEs into the folds of organized lending bringing us closer to Aye’s goal of nationwide financial inclusion.

Being the only scaled, pan-India player in the industry to offer unsecured small-ticket business loans to a major credit-starved micro-enterprise market, we have conquered the difficult-to-lend niche with our innovative cluster-based credit evaluation technique and efficiently modernized phygital system – a system that uses technology to bridge the gap between the digital and physical world. Aye Finance also extends “beyond financial” assistance to micro firms through its non-profit subsidiary FAME (Foundation for Advancement of Micro Enterprises), which has become a trusted stakeholder in their path to a new-age India.

At Aye, all choices are made with the goal of balancing financial and social efficiency to help in the holistic and protracted progress of micro-enterprises. We are dedicated to providing these businesses with the necessary financial as well as non-financial support taking us a step closer to financial inclusion which is central to Aye’s approach.