Weaver of her own destiny 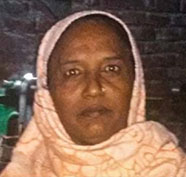 Varissa Khatoon was living a comfortable life in a district in Meerut managing her house and her two children when life rocked her steady boat and tipped her over. He husband met with an accident leaving him paralyzed from the waist down. The steady source of income from his power loom business stopped and the family’s expenses shot up adding her husband’s medical bills to their monthly outlay. A few months passed and all of the family’s meagre savings were wiped out.

Varissa had never needed to step out of her house and did not have any employable skill making her job prospects bleak. The only option left for her to reduce her household expenses was to take her kids out of private school but it broke her heart even thinking about it. She and her husband had not attended school and had faced enough discrimination to realize the importance of a good education.

What lies behind us and what lies ahead of us are tiny matters to what lies within us. This best describes the decision Varissa made to rescue her family from a life of hardship.

Varissa, despite having had no prior experience of running a power loom, decided to reopen her husband Iqbal’s business. She had watched from the sidelines when Iqbal used to run the shop, but this running the business on her own was entirely different. But Iqbal guided her and also contacted his regular customers to procure orders for Varissa. She recounts how uncomfortable she was in the beginning dealing with male customers and how her workers resisted taking orders from a woman initially. When asked how she overcame these challenges, she just shrugged her shoulder and said “Adat par gayi. Mujhe bhi aur dusro ko bhi” (I and the others got used to it over time)

Varissa required financial support when the ever increasing price of thread was leaving her with lesser money to pay her workers and cover her other costs. She applied for a working capital loan of Rupees one lac (Appx $1300) which solved her liquidity crunch allowing her to take on more orders. The first credit line from Aye helped her tide over for 9 months but when the peak season arrived she again found her business running low on capital. She approached Aye’s Loan Advisor and was happy to know that she could now be offered a higher loan without any additional documents as she had repaid her installments on time every month. She is now in her fourth cycle of loan with Aye, the last tranche was used to purchase an additional power loom machine. She takes immense pride in having her name mentioned on the property papers of her factory and the life she has built for herself and her family.

Aye feels proud to have supported an entrepreneur like Varissa who had fought against all odds to not just rebuild her husband’s business in Meerut’s male dominated society but also making a transformative impact to her family and the country’s economy.